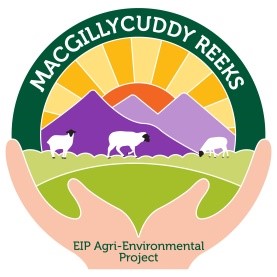 The MacGillycuddy Reeks EIP Project is a European Innovation Partnership (EIP) funded by the Department of Agriculture, Food, and the Marine under the Rural Development Programme 2014-2020. It is a locally-led agri-environmental project running from 2018-2022 and is one of 23 EIP-Agri Operational Groups projects in Ireland.

This project aims to improve the sustainability and support the economic viability of farming in the MacGillycuddy Reeks, which is designated by the EU as a Special Area of Conservation (SAC).

Improving the sustainability and supporting the economic viability will be done through the development of practical, achievable actions and innovative solutions in order to improve the condition of the habitats in close conjunction with the farmers in the area.

The majority of the MacGillycuddy Reeks is designated as an SAC, meaning it is protected under legislation.

Many farmers in the area face difficult challenges farming in their daily lives, due to:

The project was initiated in April 2018 by SKDP and is one of 23 EIP projects funded by the Department of Agriculture, Food, and the Marine (DAFM) under the Rural Development Programme 2014-2020.  Our locally led agri-environmental project is to be delivered over four years, ending in 2022.

The project was officially launched in December 2019 by DAFM Minister, Michael Creed.

The project is overseen by an Operational Group, with SKDP as the lead partner and consists of members from other organisations: 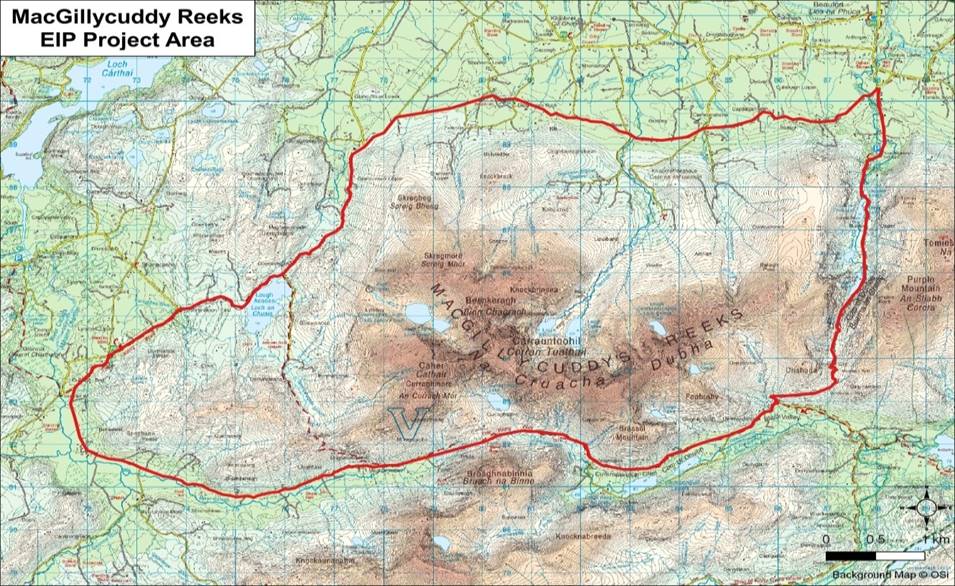 Boundaries stretch from the Gap of Dunloe Road in the East, to Glencar (including Lough Acoose) in the West and from the Kerry Way in the South to the Board of Works Road in the northern foothills of the Reeks.

Objectives
While we have many partners, we are working closest with farmers to achieve the aims and objectives of the project.  We aim to:
Approaches

We aim to improve the habitats in the MacGillycuddy Reeks through developing innovative solutions and working with farmers to manage their lands in a practical way, while still continuing to farm the land, both private and commonage lands

Each participant farmer will have their land studied by the Project’s Ecologist (Mary Toomey) and a detailed annual work plan will be devised in conjunction with the farmer.  This work plan will be guided by best practices and help manage their land in a way that respects the habitats, landscape and biodiversity of their holding. e.g. treatment and management of rhododendron.

Once the required actions are marked as completed, the farmer will receive a payment for the actions carried out.

An incentivised resulted based payment system is also being utilised, based on the habitat quality of the land. This will be determined using a habitat scorecard developed by the MacGillycuddy Reeks EIP Project Team. The habitat quality relates to specific quantitative and qualitative environmental attributes. These reflect habitat condition, landscape value and the richness of biodiversity in the area. This will be supported through controlled grazing.

Two examples of practical actions being undertaken through our innovative project are Rhododendron and Bracken management.

This large perennial evergreen shrub is native to the Iberian Peninsula and Asia but was introduced to Ireland during the 18th Century because of its’ attractive flowers. 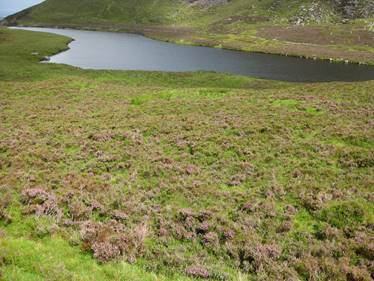 While they are very pretty to look at, this invasive species has colonised many habitats including agricultural land, causing huge problems.

This aggressive coloniser is ecologically damaging as it forms dense thickets which smother the ground and suppresses the regeneration of native flora.

In many parts of Kerry they block pathways, restrict watercourses and encroach on roadways.
We will work with farmers to control or remove rhododendron from their land.  We will use the same methodology as has been developed in Killar­ney National Park, which uses a combination of approaches.

Bracken is a fern which is native and naturally found on heathland. 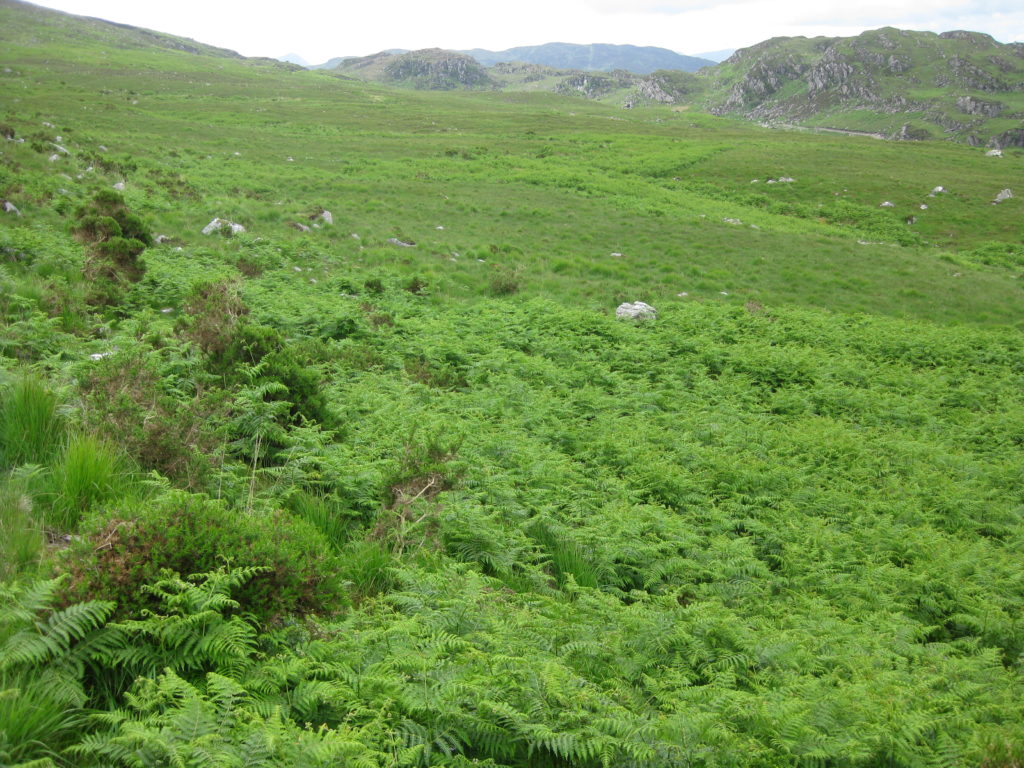 However, as it spreads easily it can invade large areas, shading out heather and sphagnum (a type of moss).
This leads to the loss of heath and bog habitats as well as grazing areas and many farmers in the Reeks area suffer bracken invasion.
We will work with farmers to control or remove bracken from their land, using several different approaches.  In some cases, livestock can be used to help control areas as they can trample the ferns.

There are a number of other Actions that will be carried out as part of this innovative project, as follows:

Training will be needed to achieve the aims of the project. We offer farmers in the catchment area all training relevant to their needs, in order to carry out their actions.  Training focusses on sharing best practices from experts but with an emphasis on hands-on learning.  Example topics include:

These practical sessions will also enable attendees to share their skills and experience with the group.

Facilitating guest speakers on topics relevant to the farmers is also very important to raise awareness of issues and these have included talks on:

Practical demonstrations on new and innovative technologies are also supported by the MacGillycuddy Reeks EIP Project, such as this ‘Robocut’ demo that was held in February 2020.

Every year, the MacGillycuddy Reeks become a more popular destination for hillwalkers or those wanting to climb peaks like Carrauntoohil. 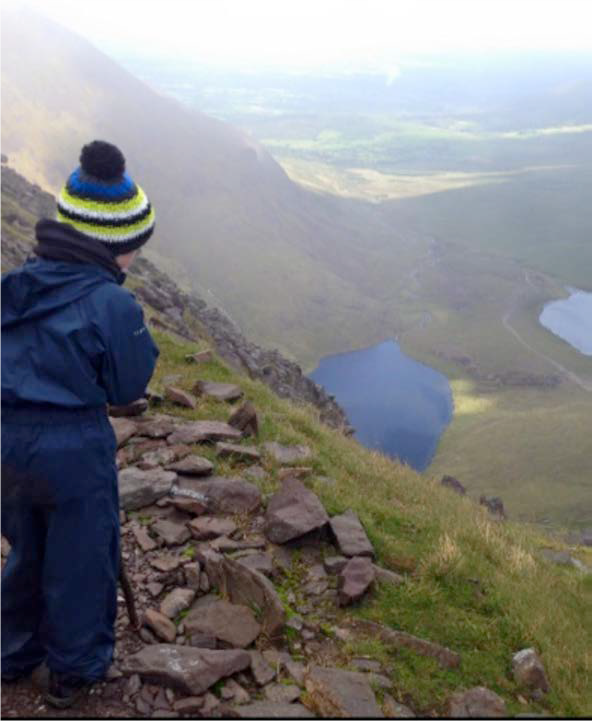 However, with increasing recreational activities comes the potential for impact to the environment.

Unfortunately, this is the case in this sensitive upland area with a loss of vegetation and damage to the habitats detected in places, due to trampling.  Over time a damaged zone can continue to spread outwards, resulting in the paths becoming wider as people prefer to walk on grassy vegetation instead of loose stone and rock.

In order to protect the fragile habitats, it is important that those walking in the mountain walk to the centre of the paths.

One way of achieving this is to improve and maintain the surface of the existing mountain paths.

Landowners are encouraged to act as ambassadors for MacGillycuddy Reeks, in order to raise awareness of key issues and challenges facing them.  This is carried out through the development of a network of ‘rangers’ who will engage with recreational users, particularly along the main access routes to Carrauntoohil.  Fostering positive interactions between landowners and tourists is an important way to ensure the two are working together.  Rangers will be on hand to advise on topics like

Rangers also conduct surveys with visitors.  Training needed for this role is provided through the Reeks EIP project.

We are engaging with younger people living in and around the MacGillycuddy Reeks area through a programme we have devised to raise awareness of the Special Area of Conservation, why the area is designated, what habitats and species are found in the MacGillycuddy Reeks, why farming is important and the environmental benefits of peatland habitats.   We give informal talks to children in national schools in the locality.  School children get to see first-hand why moss is important for good water quality – they also create their own bog in a bottle!

Department of Agriculture Food and the Marine EIP portal

Our Website – More background on the Reeks and EIP Project

And here is a project document describing the terms and conditions of our Project: