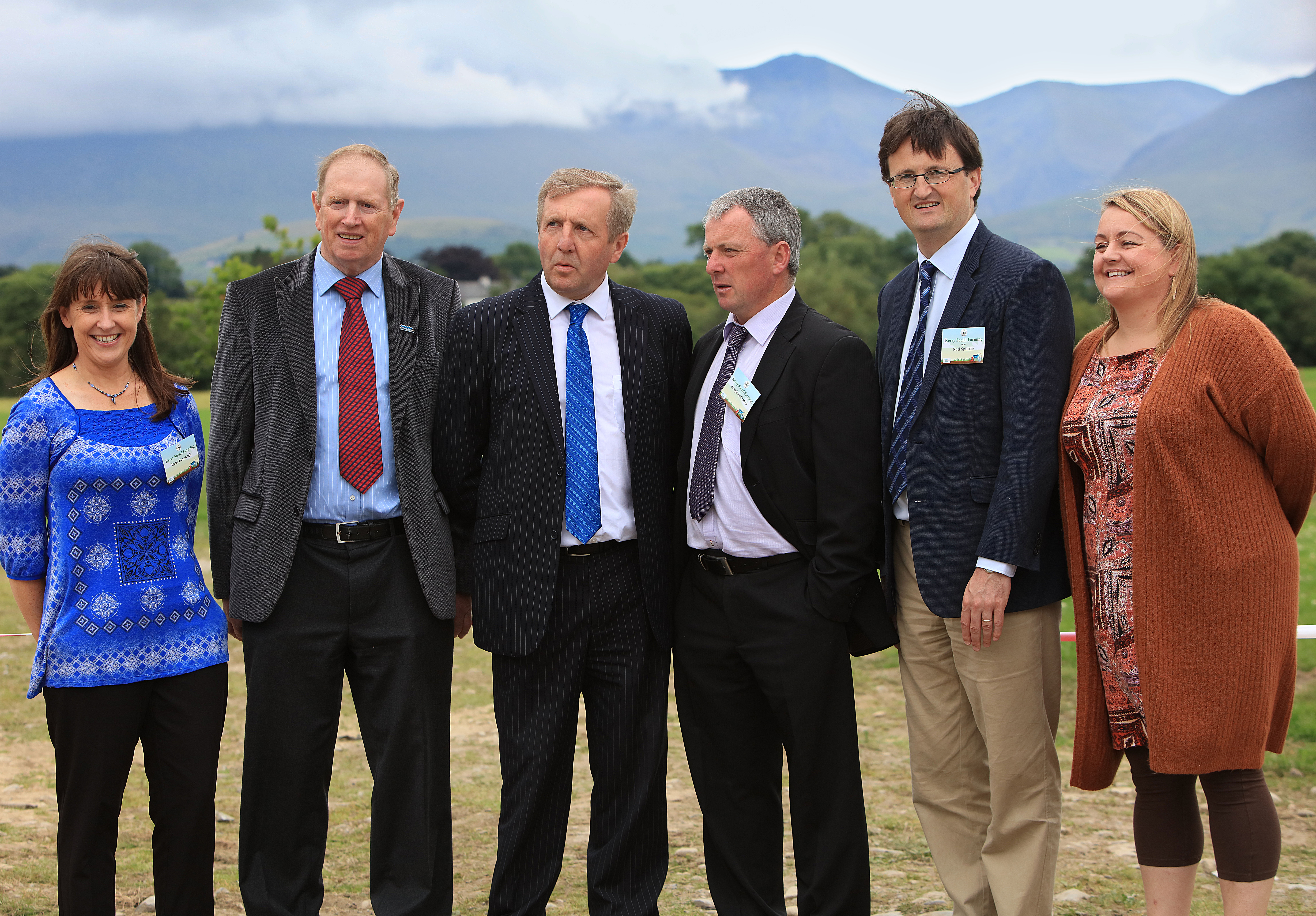 Social Farming Works – this is one of the key findings of an Evaluation Report on Social Farming in Kerry, launched by Minister Michael Creed last week. The report, which was prepared by Dr Brendan O’Keeffe (Mary Immaculate College), Dr Caroline Crowley (Crowley Research) and Dr Shane O’Sullivan (Limerick Institute of Technology), was commissioned by the Kerry Social Farming (KSF) Working Group in 2016, under the umbrella of lead partner South Kerry Development Partnership CLG (SKDP). The commissioning of this Project Review formed part of a Social Farming Model Project developed by KSF/SKDP and is being funded by the Department of Agriculture, Food and the Marine (DAFM), via the Commission for Economic Development of Rural Areas (CEDRA). The authors undertook a detailed independent review of the Social Farming initiative in Kerry to access its impact as well as to examine ways in which the project can be developed and enhanced.

A huge crowd turned out for the launch of the report on what was a fantastic day at George Kelly’s  ‘Hazelfort’ Farm, at Ballymalis in Beaufort, Co. Kerry, where visitors got the chance to go on a tour of the farm to meet with participants, host farmers families, and a multitude of stakeholders involved in the social farming initiative.

There are currently over 20 participants and twelve host farms engaged with the KSF Project, which is administered by SKDP. The current project has also seen the appointment of a full time co-ordinator, Irene Kavanagh, to oversee the project, and the numbers of farmers and participants are expected to increase in the coming months. Each of the participants visit their host farm at least once a week, where they undertake a variety of tasks with the host farmer around the farm, from feeding the animals to minor repairs to undertaking a variety of engaging farm activities and projects.

Outlining the findings of the report, Dr Brendan O’Keeffe stated that the Social Farming initiative, which first began in South Kerry in 2013, has yielded multiple dividends for all involved. “The model adopted in Kerry works particularly well because it has been tailored and adapted for local conditions” Dr O’Keeffe noted, adding that the openness of host families, the bottom up approach adopted by SKDP, the funding now being provided by the DAFM and the person centred approach are among the key factors leading to its success. Among the recommendations contained in the report was the need to enhance the input of the participants in the project, to expand training opportunities for both participants and host farmers, to secure additional sustainable funding for social farming, to maintain the locally-led structure, and to remove the bottleneck in relation to the insufficient numbers of support workers required to assist participants on the farms. In relation to the recommendations Dr O’Keeffe said that the report’s authors strongly contend there are no excuses and no reasons as to why these recommendations cannot be implemented.

In welcoming the report, SKDP Chairperson Gloria O’Driscoll also highlighted the input of the other  agencies involved in KSF such as St. John of God Kerry Services,  Kerry Parents and Friends Association, North East West Kerry Development, Enable Ireland, Down Syndrome Kerry, Cunamh Iveragh, Local Link Kerry, the HSE and Kerry County Council.  “This report has provided us with clear recommendations which we hope we will be enabled to implement in the future to ensure the continued success of the project”, Gloria said, adding that one of the most vital elements is to ensure that funding is made available on a long term, sustainable basis to enable the project achieve its full potential.

In his address to the gathering, Chairman of CEDRA and recently appointed Ambassador for Realising our Rural Potential, Pat Spillane said that he was passionate about rural Ireland, and that the KSF initiative encapsulates everything that is good about rural Ireland. He said that KSF shows what can be achieved by everyone working together and that everyone in rural Ireland needs to work together and to be proactive rather than reactive. He said rural Ireland had been neglected for too long and it was time all Government Departments worked together to support the vibrant communities that still exist in rural Ireland, but who need help and support to survive. Pat Spillane also provided the foreword for the report, and in it he re-stated his call for greater investment in local development companies – such as SKDP, which he noted are the ideal vehicle for the delivery of social farming and other similar initiatives. He added that it was time rural Ireland was treated the same way as urban areas.

MEP Seán Kelly praised the host farmers involved in the project and pointed to the element of volunteerism as being vital to the project.

In his address, Minister Creed said it was a humbling experience to meet with the participants in the KSF initiative, and he was very pleased to see that it works.  “Inclusion isn’t just a word, its actions” Minister Creed said and he praised the fantastic collaboration that existed between all the groups involved in social farming in Kerry. He said the report findings and recommendations will be of benefit to all, highlighting how the initiative can be improved and developed, and to inform what broad lessons can be transferred to other areas of the country. Minister Creed said he was delighted to be in South Kerry to launch the report and the words he heard from all the participants, and those involved with the social farming initiative in the county, will echo with him.

A number of host farmers, participants and guardians also addressed the gathering, and all expressed their delight with being involved with the social farming initiative and highlighted the significant benefits they got from this involvement. All expressed the desire to continue with the programme and to help expand it where possible to involve more participants and host farmers. The event was also attended by groups from other parts to the country who have similar social farming initiatives or who are interested in developing such an initiative.

Social farming is where family farms offer social, health or training supports to a small number of people with particular needs in a supervised programme of farming-related activities. In Kerry Social Farming, people with intellectual disabilities or acquired brain injuries attend farms of all sizes involved in market gardening, dairying, sheep and beef production.